Facebook Twitter LinkedIn Tumblr Pinterest Pocket Skype Messenger Messenger WhatsApp Telegram
With more national and international acts coming at the beginning of next week, this weekend offers you a perfect chance to get live and local. Experimental industrial band ManifestiV, blues rockers Texicana and rock ‘n’ rollers The Roomsounds are all celebrating one kind of new release or another on Friday and Saturday while The Polyphonic Spree are celebrating their back catalog, and the songs that have inspired the band through the years, at the Kessler Theater. Next week offers music fans some incredible co-headliners: The Fixx with Fastball at Granada, James Taylor with Jackson Browne at Dickies Arena and Bad Religion with Alkaline Trio at Amplified Live. Rounding out the list this week are singer-songwriters Anderson East, who plays Trees Friday night, and Alec Benjamin, who will be playing at The Factory in Deep Ellum on Saturday. And if you’re still looking for more, there definitely is more to find.
Anderson East
8 p.m. Friday, Oct. 15, at Trees, 2707 Elm St., $31.50 at axs.com

Born in Athens, Alabama, singer-songwriter Anderson East made a splash in the Nashville music scene back in 2015 when his debut single “Satisfy Me” started receiving heavy airplay on independent music stations and his major-label debut Delilah was welcomed with rave reviews from the songwriting community. The singer’s acclaim continued when his second album, Encore, received praise from national publications. The album also produced the Grammy-nominated song “All On My Mind.” Now touring for his third album on Elektra/Low Country Sound, Maybe We Never Die, East performs Friday night at Trees with opening support from labelmate Aaron Raitiere. The new album finds the singer taking his trademark Americana sound in a new direction — this time more vulnerable, looking for peace in the routines of daily living.
ManifestiV
8 p.m. Friday, Oct. 15, at Haltom Theater, 5601 E. Belknap St., $10 at the door

As a follow-up to their 2020 Dallas Observer Music Award-nominated video “Just Wait,” experimental industrial band ManifestiV will debut an animated music video for new song “Business as Usual” this Friday night on the 35-foot screen at the Haltom Theater. The video is a project on which the band has spent many months, funded in part by a successful IndieGoGo crowdfunding campaign. Fans who donated or still wish to donate to the campaign will be awarded free entry into the night’s show with a matching ID. A DJ Crash production, Friday night’s show will also feature an eclectic lineup of performances by metal band Midnight Murder Show, psychedelic hip-hop group Lost Art Legacy, country-rock band Backhand Sally, and a solo acoustic-punk performance by Richard Haskins of The Wee-Beasties. You are not going to find this kind of range in talent anywhere else in North Texas this weekend.
Texicana
9 p.m. Friday, Oct. 15, at Double Wide, 3510 Commerce St., $10 at prekindle.com

One day, a group of friends in East Dallas got together at a neighborhood bar. The idea was to start a band without any real stock placed on what would happen. A few months later, that same newly formed group, now calling themselves Texicana for their mix of blues, rock and Latin flavor, found themselves winning the 91.7 KXT’s Tenth Anniversary Tiny Cake Contest and earning a lot of local recognition. Texicana has gone on to share the stage with the likes of Grady Spencer and the Work, Grace Potter, Devon Gilfillian and Black Joe Lewis. You may have heard Texicana’s new song “Wild and Free” on KXT’s local show recently, but if you missed it, this is your chance to see it happen live. This Friday, Texicana will celebrate the release of their brand new EP Little Bit of Trouble, headlining a night at Double Wide featuring alt-rock band King Clam and power-pop-punk band The Lash Outs.
The Polyphonic Spree
7 p.m. Saturday and Sunday, Oct. 16-17, at The Kessler, 1230 W. Davis St., $26 at prekindle.com

Support the independent voice of Dallas and
help keep the future of Dallas Observer free.

Dallas collective The Polyphonic Spree has been making music fun and spectacular for over 20 years. The band’s song “Light and Day” was famously featured in a Volkswagen Beetle/iPod crossover commercial in 2003, which launched the band’s career, taking them to the set of the comedy series Scrubs, scoring the 2005 film Thumbsucker and recording for countless show and film soundtracks. This weekend, the band will perform two nights at The Kessler Theater in Oak Cliff. Polyphonic Spree will play two sets on each of these nights. In one set, the band will perform fan favorites from their five albums and four EPs, perhaps even something from their Christmas album. The second set will be made up of cover songs the band loves to play. Each night will be recorded for the purposes of the band’s upcoming live EP. Rather than having an opening band, The Polyphonic Spree has opted to have stand-up comedians warm up the crowd. Lawrence Rosales opens night one, and Tony Casillas opens night two.
The Roomsounds
7:30 p.m. Saturday, Oct. 16, at Sons of Hermann Hall, 3414 Elm St., $15 at prekindle.com

This Friday, Dallas rock band The Roomsounds will release its new album, Good Company, everywhere music can be listened to, and on Saturday, the band will celebrate with an album release show at Sons of Hermann Hall in Deep Ellum with opening support from Midlake’s Joseph M and the piano-driven rock ‘n’ soul of Dr JOE. Now entering their second decade as a band, The Roomsounds have again teamed up with producer John Pedigo at Audio Dallas to freshen up the band’s signature rock ‘n’ roll sound. Good Company includes 12 genre-melding tracks on which the band experiments with sounds from the worlds of pop and soul. The album also finds the band growing more confident with the passing of time, making music they genuinely enjoy with the precision that only comes with years of experience. You are sure to see this confidence on stage as well.
Alec Benjamin
8 p.m. Saturday, Oct. 16, at The Factory in Deep Ellum, 2713 Canton St., $35 at axs.com

Drawing from influences as disparate as Eminem, Coldplay and Paul Simon, Phoenix singer-songwriter Alec Benjamin headlines Saturday night at The Factory in Deep Ellum. Benjamin’s breakthrough came in 2018 when his song “Let Me Down Slowly” reached top-40 status in over 25 countries. Benjamin’s road to success was a long one, however. Initially signed to Columbia Records, Benjamin was dropped by the label after submitting his first album. The singer supported himself by playing in parking lots outside of music venues while handing out business cards and funded his own tours opening for Marina Kaye in France and Lea in Germany. Benjamin was finally able to release his major-label debut These Two Windows in May 2020, reaching 75 on the Billboard 200 list. Benjamin’s opener for the night is Kansas City emo-pop singer and TikTok sensation Anson Seabra.
The Fixx and Fastball
7 p.m. Monday, Oct. 18, at Granada Theater, 3524 Greenville Ave., $37.50 at prekindle.com

The next week starts off with a fixture from the early English new wave scene and a mainstay band of late ’90s alt-rock radio when Fastball joins The Fixx in concert at the Granada Theater in Lower Greenville. Fastball came out of Austin in 1997 with their smash hit “The Way” from their album All the Pain Money Can Buy and its follow-up singles “Fire Escape” and “Over My Head.” And while they have yet to match the success of their breakthrough album, Fastball has never stopped recording or touring. The Fixx was founded in London a year later in 1979 and brought pop and art rock into the mix for their brand of new wave music. Also scoring big in 1983 with their single “One Thing Leads to Another,” The Fixx has recorded 10 studio albums over the course of their career while frequently touring the world. Having both bands in the house will surely make for a night filled with ’80s and ’90s nostalgia and probably more songs you can sing along to than you realize.
James Taylor and Jackson Browne
7:30 p.m. Tuesday, Oct. 19, at Dickies Arena, 1911 Montgomery St., $79+ at ticketmaster.com

While this may look like it’s going to be your dad’s absolute favorite concert ever, having James Taylor and Jackson Browne together performing on the same stage on the same night might just be the songwriters’ night of the year. Taylor and Browne will play songs from across their decades-long careers Tuesday night at Dickies Arena in Fort Worth. Both singer-songwriters started their life in music in 1966, breaking through during the folk-rock explosion in the early ’70s. Taylor’s breakthrough came in 1970 with Sweet Baby James and its quintessential song “Fire and Rain,” and Browne’s moment came in 1972 with his self-titled debut featuring “Doctor, My Eyes.” Taylor’s and Browne’s songwriting skills have not let up over the past 50+ years. More than a nostalgia tour, both singer-songwriters are touring in support of their newest albums.
The World Is a Beautiful Place & I Am No Longer Afraid to Die
7 p.m. Wednesday, Oct. 20, at Club Dada, 2720 Elm St., $20 at prekindle.com

Yes. That is the full name of the band, but for the sake of brevity, let’s call them The World Is — an atmospheric emo/indie-rock band from Willimantic, Connecticut. One of the bands that led the emo revival movement in the early 2010s, The World Is captured the hearts and minds of even the sternest music critics with their 2013 release Whenever, If Ever on Topshelf Records. The band went on to release three albums on Epitaph Records including their latest, Illusory Walls, which hit record shelves and streaming services earlier this month. An ornate and complex album, Illusory Walls demonstrates the band’s technical proficiency without letting up on the emotional weight of its lyrics. For their Wednesday night show at Club Dada, The World Is will have opening support from Baston art-rock band Bent Knee and rock band Greet Death from Flint, Michigan.
Bad Religion and Alkaline Trio
7:30 p.m. Wednesday, Oct. 20, at Amplified Live, 10261 Technology Blvd. E, $35 at seetickets.us

This is a somewhat odd pairing, but we’ll take it: ’80s-era, political, Los Angeles punk band Bad Religion plays the new Amplified Live Wednesday night with opening support from their labelmates, ’00s-era, Chicago emo-punk band Alkaline Trio. Bad Religion’s impact on the punk rock world is unmatched. Not only has the band been consistently putting out albums filled with impeccable insights on the world around them since 1982, their guitarist Brett Gurewitz started Epitaph Records, which has become one of the most important punk labels in existence. While Alkaline Trio has shied away from openly political songs, they bring the same kind of in-depth thinking about the inner turmoil as Bad Religion does to international turmoil. Not to be left out of the equation is the night’s opening act War on Women, a riot grrrl throwback band that is every bit as pissed as the founding mothers of the genre. A mixed bag, yes, but one that will surely satisfy.

Smutty Smiff Gets His Bass Back 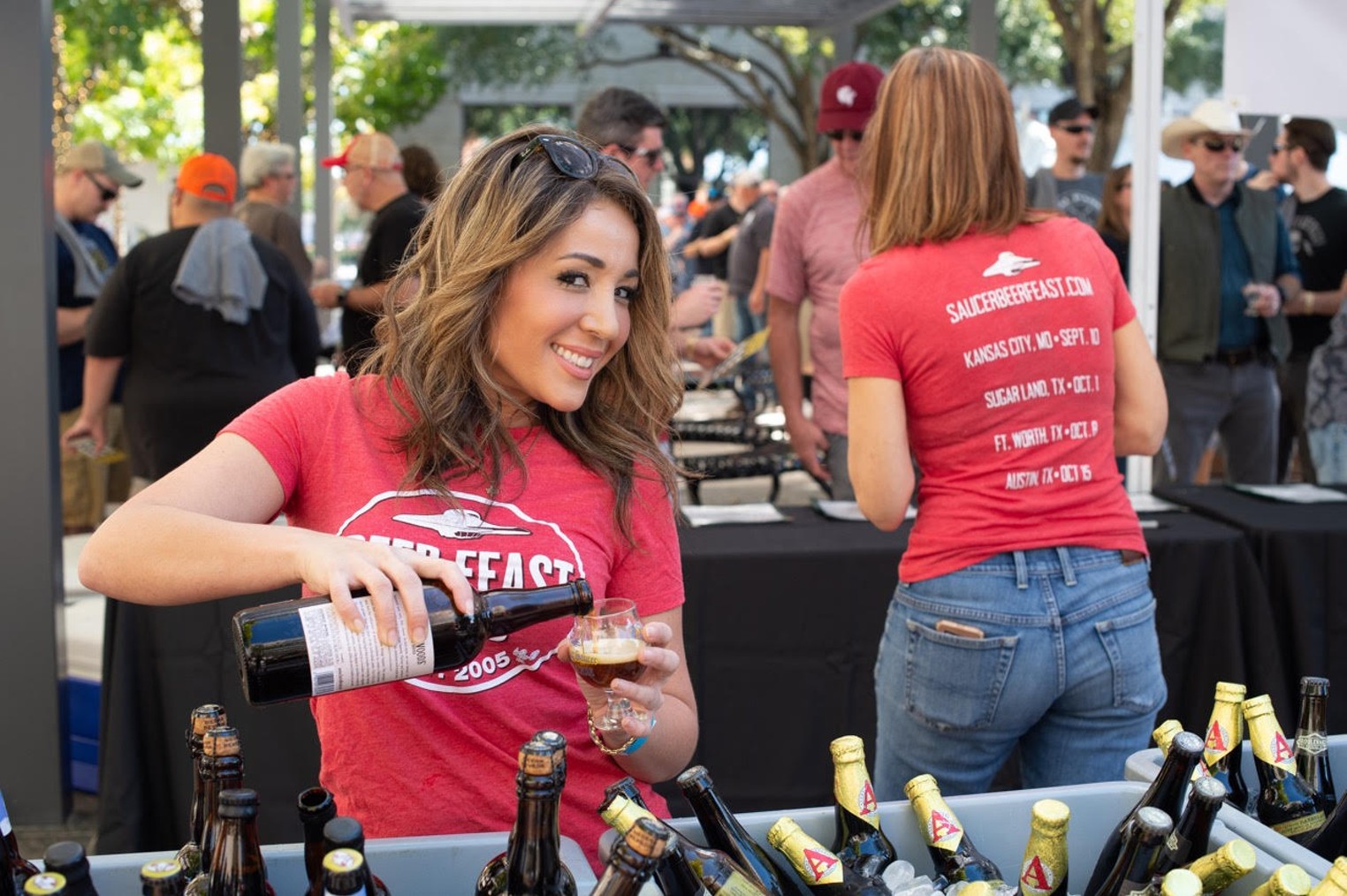 15 Foodie Finds, Events and Fests for This Gloriously Beautiful Weather

Detour Donuts is Peddling Their Goods in Dallas at Foxtrot Markets